65% of small business owners are ‘very worried’ about the negative financial impact overall—and specifically revenue (66%), financing (41%), ability to pay salaries (43%) and difficulty paying their rent/lease (38%)
Only 55% think the emergency Federal aid will be effective

Vancouver, BC —In one of the largest surveys of its kind, a new Insights West poll conducted this week with 580 small business owners across BC shows a very high level of worry about the negative financial impact on their business with huge impacts on revenue, financing, layoffs as well as their personal financial situation. While most think the crisis is a temporary three to four month event, about a third of businesses are not sure they will survive the fallout of this crisis.

Nearly all (93%) small business owners are worried about the negative financial impact of COVID 19 on their business—with the majority (65%) being ‘very worried’, and a further 28% being ‘somewhat worried’. Only a small group of 7% are not worried about a negative financial impact. The crisis has shut down 43% of small businesses, and a further 27% are operating—but are having difficulties. Another 23% are operating a little differently but are still up and going, while only 8% say it’s business as usual.

There are differing opinions as to how long this crisis will last—only 21% think we will be back to normal within 60 days, with a similar number (21%) feeling it will be 90 days, and 20% thinking it will take 6 months. 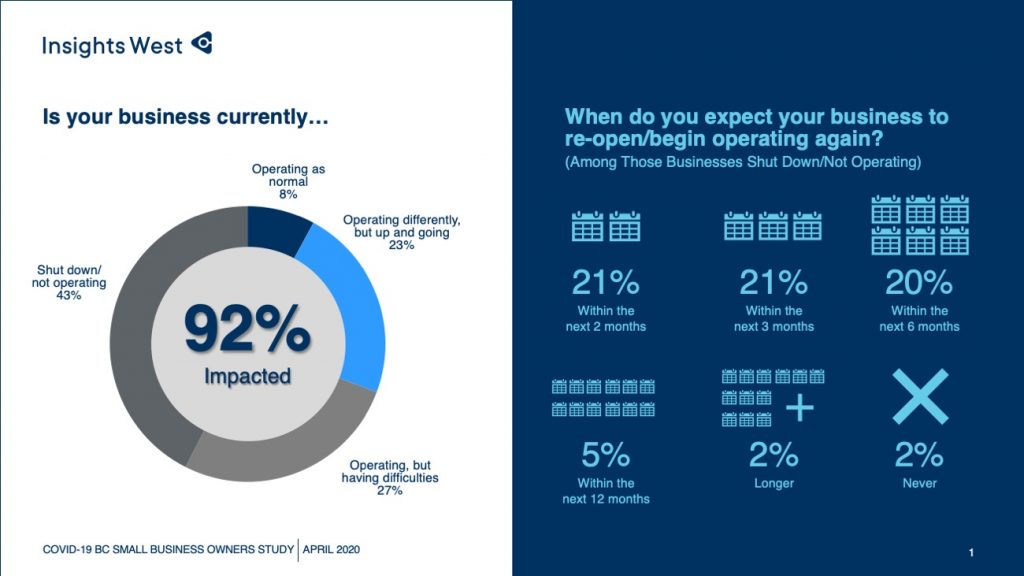 More than half (58%) of small business owners say this crisis will likely result in them closing their business temporarily (43% definitely vs.15% probably). More alarming is that 31% of owners think that this crisis might or might not force them to shut down their business permanently, and 9% say that it will definitely or probably force them to close for good. Even the more optimistic once still fear the possibility—as only 32% say they will definitely keep their business open, while 28% say it will probably not result in them shutting down their operations. On a similar vein, 7% of businesses surveyed say this will force them to declare bankruptcy, while almost one-quarter (23%) say it might or it might not force them down this path. 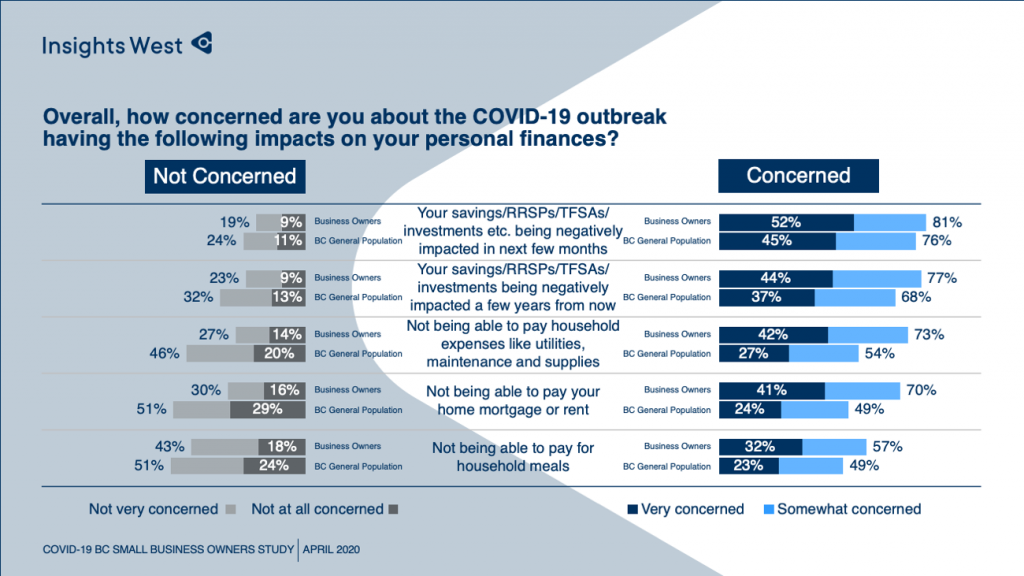 The measures that the Federal government have undertaken to support small business owners is viewed somewhat sceptically—as just over half (55%) say the emergency aid package will be effective in addressing the financial needs of their business (and of these—most feel it is only ‘somewhat effective’ (49%) vs. ‘very effective’ (6%). One half of the survey results were completed before the 75% Federal wage subsidy was announced, but our analysis shows that didn’t impact opinions on either side.

“As the implications for the COVID-19 pandemic continue to unfold, small business owners have been thrust into the spotlight at a provincial and federal level because of the serious negative financial impact that this is having on this particular segment of society” says Steve Mossop, president of Insights West. “Our poll measured the extent of the negative impact and it appears to be as bad or worse than what we’d anticipated. The disastrous financial effect is being felt deeply at a personal as well as a business level among small business owners, and it’s likely to result in an unprecedented level of possible permanent closures unfortunately.”

Insights West is a full-service marketing research firm based in Western Canada. Since 2012, the company has conducted over one million surveys, executed 2,000 studies, and issued over 350 press releases on a variety of topics, correctly predicting the outcomes of 24 out of 25 elections and plebiscites. Insights West is a team of passionate, truth-seeking researchers who question everything to uncover the truth and what is emerging for a diverse set of clients. With an understanding of shifting markets, consumer and societal trends, and commitment to uncovering truths through a proprietary toolkit and innovative research approaches, Insights West helps organizations make better decisions.

Results are based on an online study conducted from March 24, 2020 to March 31, 2020 among a sample of 580 small business owners in BC. Completes were achieved via reaching out to business owners in our Insights West Feedback Community as well as extensive promotion on social media such as Facebook, Twitter and LinkedIn, as well as promotion to our vast network of contacts. The sample was weighted by business size as defined by number of employees according to data provided by BC Stats from their 2019 Small Business Profile report.”
The margin of error—which measures sample variability—is +/- 4.1 percentage points, 19 times out of 20. Discrepancies between totals are due to rounding. Click HERE to view the detailed data tabulations.

This website uses cookies to improve your experience while you navigate through the website. Out of these cookies, the cookies that are categorized as necessary are stored on your browser as they are essential for the working of basic functionalities of the website. We also use third-party cookies that help us analyze and understand how you use this website. These cookies will be stored in your browser only with your consent. You also have the option to opt-out of these cookies. But opting out of some of these cookies may have an effect on your browsing experience.
Necessary Always Enabled
Necessary cookies are absolutely essential for the website to function properly. This category only includes cookies that ensures basic functionalities and security features of the website. These cookies do not store any personal information.
Non-necessary
Any cookies that may not be particularly necessary for the website to function and is used specifically to collect user personal data via analytics, ads, other embedded contents are termed as non-necessary cookies. It is mandatory to procure user consent prior to running these cookies on your website.
SAVE & ACCEPT