I provide highly individualized counselling for children, youth and families in the Sooke and Westshore area.

Each individual coming to therapy is unique, attempts to do the best possible with the resources available, has wisdom, creativity and strength. Everyone has the right to self-determination. I think that doing counselling means providing a safe place for you to tell your story, in whatever way that looks for you.

... we will work together to find solutions and approaches that feel right for you.

Sailing lessons and trips for families or individuals.

We would love to take you out for a fun 3 - 4 hour introduction to sailing or help you improve on your skills with Sail Canada lessons. We also teach and   examine the PCOC and Marine Radio.

Send us your information and rough (or exact) timeline and we will contact you to find out what works for you. We may have someone else looking for a course at the same time that we may be able to pair you up with. Thanks for your patience. 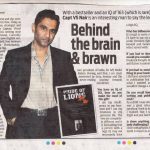 He is also an Author, Yogi, and Investor who is a High Functioning Autistic (Asperger's syndrome) with an IQ of 163. This condition comes with challenges but it also affords him gifts like hyper-focus, information curation, laser analysis to get to the core of issues, and pattern identification processed by an exceptionally high IQ. Vinod attributes his astounding success in the investment industry to his being Autistic.

"I will not let who I am stand in the way of who I want to be." Vinod Nair (Pride of Lions)

Vinod started his career with a brief five-year stint in the Army after which he went on to become a Coach/ Consultant. Over the next three decades Vinod coached- consulted for an estimated 650,000 people in over 200 companies across 3 continents.

Literate in Sanskrit, Vinod has a deep understanding of ancient Indian philosophies and texts. His knowledge of Yoga, breath-work, the Bhagavad Gita, Shiv Puranas, Indian philosophy, and his Western management approach and tools have produced impressive results and captivated audiences worldwide.

Vinod has written books on management er the years but his 2012 fiction thriller novel 'Pride of Lions' became a best seller through 2013 and is still selling today. A reclusive yogi, Vinod can be found at his Vedic retreat in Sooke on Vancouver Island, Canada.

Women’s Enterprise Centre is a non-profit organization devoted to helping BC women start, lead and grow their own business.

Since 1995, WEC has fueled the success of women-led businesses by providing business loans up to $150K. We also provide business skills training, personalized business advice, mentoring, practical business resources and a supportive community to help women business owners gain the skills, mindset, financing and networks they need to realize their business potential.

Our team understands and relates to the unique circumstances of women business owners. Our experienced business advisors, mentors, trainers and facilitators provide our clients with tools and confidence through a supportive, individual and practical approach.

This website uses cookies to improve your experience while you navigate through the website. Out of these cookies, the cookies that are categorized as necessary are stored on your browser as they are essential for the working of basic functionalities of the website. We also use third-party cookies that help us analyze and understand how you use this website. These cookies will be stored in your browser only with your consent. You also have the option to opt-out of these cookies. But opting out of some of these cookies may have an effect on your browsing experience.
Necessary Always Enabled
Necessary cookies are absolutely essential for the website to function properly. This category only includes cookies that ensures basic functionalities and security features of the website. These cookies do not store any personal information.
Non-necessary
Any cookies that may not be particularly necessary for the website to function and is used specifically to collect user personal data via analytics, ads, other embedded contents are termed as non-necessary cookies. It is mandatory to procure user consent prior to running these cookies on your website.
SAVE & ACCEPT